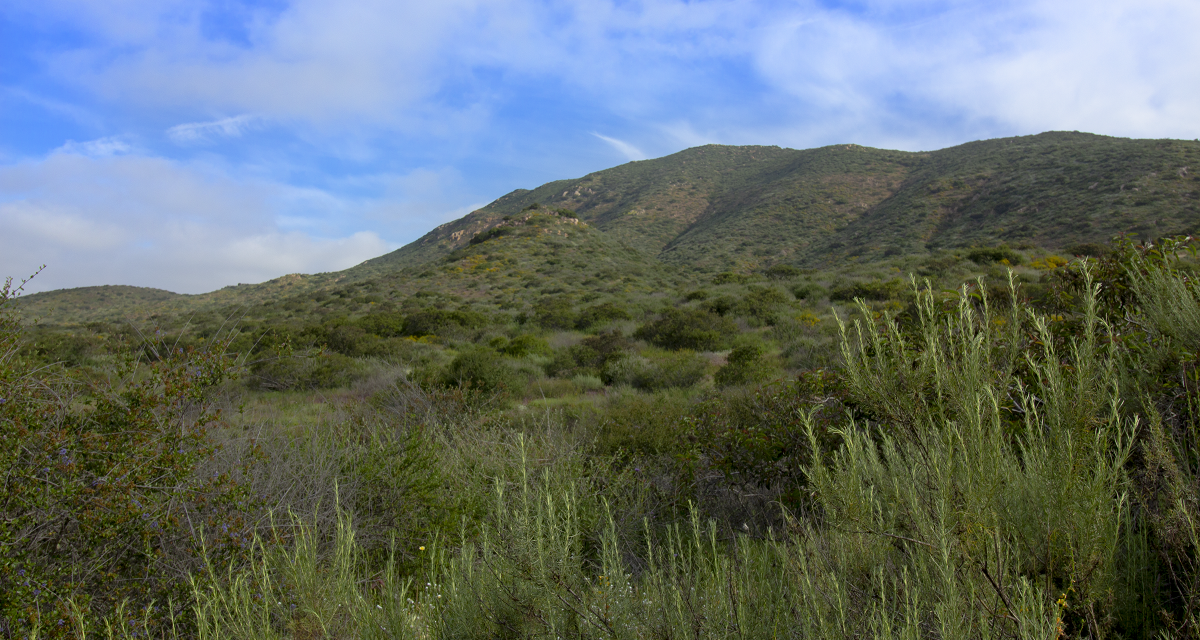 North Fortuna is the northernmost peak in Mission Trails Regional Park. This park is located in San Diego, California and is great for its views of San Diego County and wildflowers during the spring.

In the heart of the City of San Diego rest about 7,220 acres of open space land. This area is known as Mission Trails regional park and is available to the public for recreational use. Within the park are five distinct peaks: North Fortuna, South Fortuna, Kwaay Paay,, Pyle’s Peak, and the tallest, Cowles Mountain The peak of North Fortuna sits at 1,291 feet of elevation and is the parks northernmost and third tallest peak.  The peak is boxed in by Highway 52 and MCAS Miramar to the North Directly to the south lies South Fortuna peak.

Mission Trails Regional Park was founded in 1974 and is one of the few areas of open land in the city proper of San Diego. It is this park which essentially divides central San Diego to the eastern cities of the county. Prior to European settlers, the area was inhabited by the peoples of the San Dieguito’s, the La Jolla’s, and the Kumeeyaay’s. Of a special note, Father Junipero Serra, a important figure in San Diego’s early history assisted with the exploration of this area. His expeditions eventually led to the building of a dam along the San Diego River that runs through the center of the park.

The exact origin of the Fortuna peaks is unknown. In Spanish it means fortune. Perhaps the Spanish felt as if the views of the area from the top of the peaks would eventually lead to fortune for those who populated the area. Looking to the west is the City of San Diego, the Pacific Ocean, the hills of Mexico, and the Coronado Islands. To the north will be the Santa Ana Mountans, Mount Woodson, and Iron Mountain. Looking farther out east will be Palomar Mountain, San Jacinto Mountain, and San Diego’s second tallest, Cuyamaca Peak

Altogether there are about sixty miles of hiking available in Mission Trails Regional Park. Because of the park is so large, there are many trail entrances for this hike. This article focuses on the trail entrance from the park’s western end at Clairemont Mesa Blvd. Other notable entrances are from the Old Mission Dam via Oak Canyon and from near the visitor center off of Jackson Drive. This is one of the easier trail entrances and is about five miles in length. A complete map of all the trails can be found here.

To be honest, the North Fortuna Peak is my favorite of all the peaks in Mission Trails. The height is a about two hundred feet higher than it’s neighbor, South Fortuna and the length provides for a fun workout. This peak offers some of my favorite views of the heart of San Diego with the luxury of being so close to the city. There will be a rare treat of larger wildlife here. I’ve personally seen bobcats and deer. There have also been reports of occasional bobcats in the area.

Open in maps. The trail access will be through the western end of the park. Parking will be on the street along Clairemont Mesa Blvd. There is ample parking but crowds tend to be heavier in the morning and evening.

The start of the trail at the end of Clairemont Mesa Blvd.

There is a well known bridge here that was used for the military at one point.

Heading towards the Fortuna Saddle Trail.

Headed towards the Rim Trail.

North Fortuna in the distance from the Rim Trail.

Connecting with the Fortuna Saddle Trail.

The saddle trail heads down into a small riparian area – watch for poison oak off the trail.

Looking at the oak riparian area.

The Fortuna Saddle Trail ends up becoming a SDGE road for power lines. This split lmeets up later on up the hill.

The utility road becomes the steepest and most difficult part of the trail.

Looking down the Saddle Trail with the Rim Trail along the mesa in the far distance.

Heading up towards North Fortuna Peak, the summit in the distance.

Near the summit is what I’d call a hump with a false peak. The actual peak is straight ahead marked with a plaque.

Looking down on Highway 52 to the northeast.

Looking to the west to the Pacific Ocean on a hazy morning.

Looking to the south. In order from front to back is South Fortuna Peak, Kwaay Paay Peak, and Cowles Mountain.

Who North Fortuna Peak Is For:

Novice Hikers: North Fortuna Peak is a great trail for beginner hikers that want to try one of the more difficult trails in this park. This is also a great trail for those new to hiking but already have a great base level of physical fitness. Those people who have difficulty with elevation gain or a low fitness base will find this trail on the more challenging side.

Advanced Hikers: As someone who considers himself an advanced to expert hiker, I love this trail. I find this hike to be a good workout but not very difficult. If you’re looking for a little bit more of a workout, consider adding South Fortuna to the trail. The junction for that peak is at the same one for this peak. It only adds about 3/4 of a mile to the total distance.

Expert Hikers: This is a fun peak to check off the list for a for a quick hike if you need some outdoor time. If you want to test yourself, attempt the Five Peak Challenge in one day.

To get the most out of this trail, visit these trails from mid-winter to mid-spring. The winter rains light up the hills with green and usher in vibrant wildflowers. Exceptionally hot days should be avoided on this trial. The distance is mild enough to do in the earlier hours or near dusk on most summer months. There is no shade along the path.  It’s always a good idea to check the weather prior to hiking.

This trail is very well maintained by the County of San Diego and local volunteers. Most of the trail is made up of loose soil but a small swath of the trail has loose rocks along the utility road. Rattlesnakes are common. There is poison oak in the canyon known as Suycott Wash. This is a shallow ravine that runs between the rim trail and the peaks in north to south direction.

The entrance to trail is at the end of Clairemont Mesa Blvd. There hikers will pass over an old bridge that was used for the military. Just after the bridge there will be a fork in the trail. Continue to the right to connect with the Fortuna Saddle Trail. From this trail, the Fortuna Saddle trail will intersect with a few other crossings including the Rim Trail but maintain the course on the Saddle Trail.

The Saddle Trail is essentially a utility road that is used for the SDGE power lines that span east to west across the park. Continue following this trail and it will eventually come to a crossing that splits North and South Fortuna Peak. Follow the trail north. If your heart desires, follow the trail completely to the south on the way back to check South Fortuna off the list too. 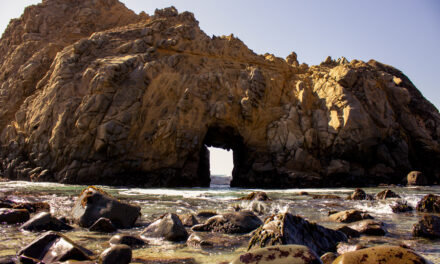 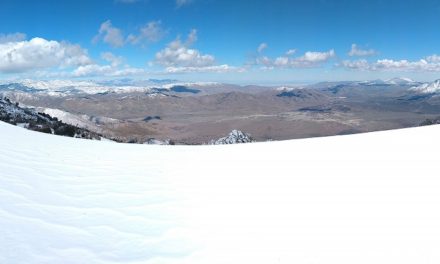 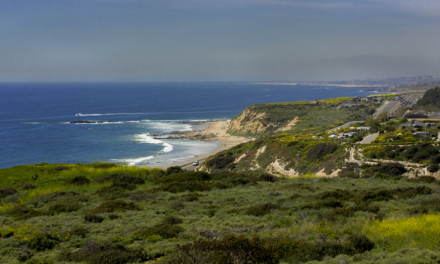