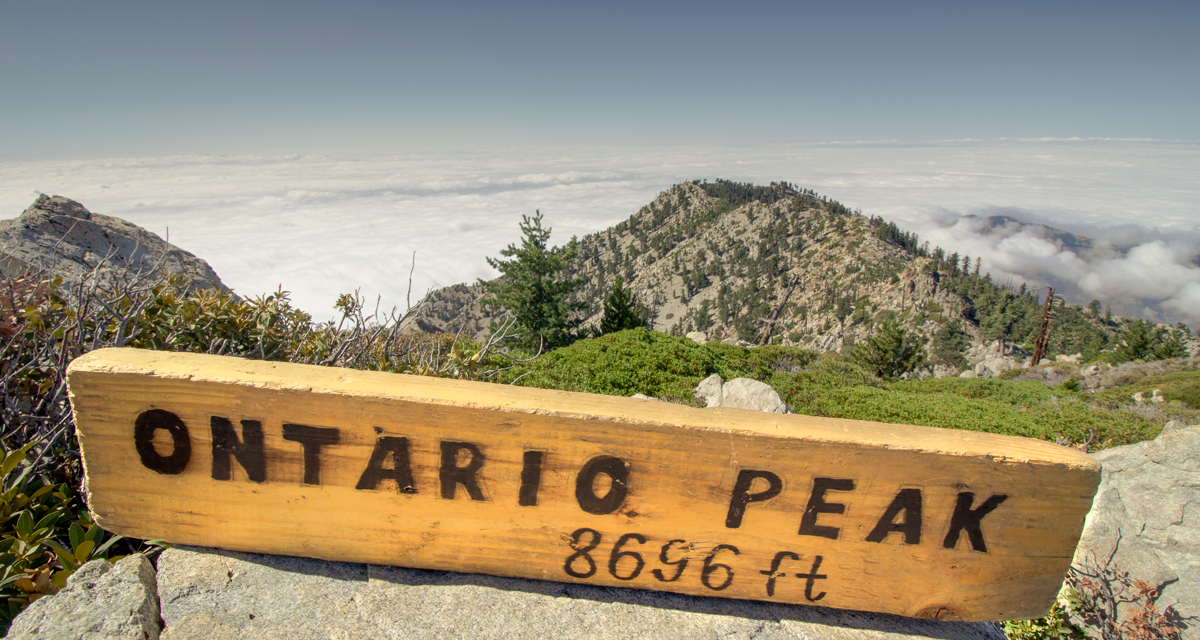 Ontario Peak is an alternate peak to one of the Southern California Six Packs of Peaks. The peak rests at over eight thousand feet of sub-alpine forests through the Cucamonga Wilderness and Angeles National Forest.

Ontario Peak sits at 8,696 feet and features a trail that is just over twelve miles long. The adventurous day hike or overnight camping trip begins just past Mount Baldy Village at the Icehouse Canyon Trailhead. This trailhead is a major trail that leads to a junction of many other peaks in the area including Cucamonga Peak. The bulk of Icehouse Canyon parallels Icehouse Creek and up past Telegraph Wash to Icehouse Saddle Junction. Along the way will be a series of old recreational cabins. The creek usually flows year round and is fed through a series of springs. There is a spring that crosses the trail just after the two mile mark. This will be the last area for water. Late in the year and in dismal water years, the spring can be unreliable.

The lower portions of the trail include an oak covered canyon. Higher elevations are a mixed conifer forest of Ponderosa, Jeffrey, and Douglas-Fir pines and Manzanita thickets. There are ample amounts of wildflowers with the later blooms lasting until late summer in the higher elevations. Wildlife viewing opportunities can include bird watching, bears, deer, mountain lions, and bighorn sheep.

The switchbacks through the Icehouse Canyon can be quite cumbersome. The good news is that the switchbacks significantly cease after the Icehouse Saddle Junction. The rest of the trail to Ontario Peak follows a ridge that divides San Antonio Canyon and Cucamonga Canyon. It’s also the dividing point between the Angeles and San Bernardino National Forest. This trail will require a wilderness permit or either an Adventure Pass or America The Beautiful Pass. Permit information can be found in the trail directions tab.

To be honest, I enjoyed this trail much more than hiking Cucamonga Peak. This peak is included on the list of the Southern California Six Pack of Peaks and in my opinion, makes a great alternate peak. Keep an eye out for bighorn sheep along the way, I did see one while approaching Kelly Camp. Prominent points of interest that can be seen from the peak are Mount Baldy, Bighorn Peak, Cucamonga Peak, Telegraph Peak, San Gorgonio, San Jacinto, and the sprawling suburban cities of Southern California.

Have you recently hiked this trail? Leave a comment with recent conditions or feel free to share your pictures in the comments

Click here for driving directions to Ontario Peak. The parking lot is small and can fill up very quickly on weekends. If the lot is full, you’ll need to find street parking. Don’t forget to purchase your Adventure Pass. You can also use an America The Beautiful pass if you’re an annual pass holder. Permits are required to hike Ontario Peak and are stocked at the base of the trailhead. The permits are used to keep track of hikers in case an accident happens and you go missing. If there are no permits, fill out a blank piece of paper with your name, address, emergency contact information, and make and model of your car.

The Icehouse Canyon trailhead is a major beginning point to many peaks in this area.

Wilderness Permits are required and are located at this small box in the beginning of the trail.

The trail head begins through this canyon carved out by a seasonal small creek. On good rain years this creek flows year round.

Some o the several switch backs leading up to the Icehouse Saddle.

Looking to the west from near the Icehouse Saddle.

Looking at the back side of Cucamonga Peak from Icehouse Saddle.

Ontario Peak will be an immediate right following this sign to Ontario Peak.

After the Icehouse Saddle, there is some relief from the switchbacks.

More of the old rock foundations from Kelly Camp.

After passing through Kelly Camp, the trail really opens op through a series of Manzanita and Lupine thickets and the remnants of mostly old dead conifers.

One of the last pushes up towards the ridge leading to Ontario Peak.

Ontario Peak in the far distance.

Looking to the south towards the Inland Empire and Los Angeles County basin.

Looking to the west towards Mount Wilson.

Looking to the north towards Mount Baldy.

One of the views looking to the south from near Ontario Peak. Cucamonga Peak, San Jacinto, and San Gorgonio seen in the distance.

Who Ontario Peak Is For:

Novice Hikers: If you’re new to hiking, really consider if this hike is for you. This is a strenuous hike with unstable terrain. Hot summer days and any snow or ice on the trial during winter should exclude you from this hike. Those with physical limitations should not do this hike. I’d recommend hiking poles.

Advanced Hikers: This hike will be a challenge for advanced hikers. If setting out when there is ice or snow on the trail, make sure to have adequate equipment. To break this trail up into a shorter section, camping is an option.

Expert Hikers: Those who have a lot of experience hiking in steep unstable terrain should have no difficulty. While it is a tough hike, weather conditions can make it harder. If you have proper equipment, you’ll have no problem. For those wanting more of an overnight experience, there are camping options which connect to longer trails in the San Gabriel’s.

Fall and spring are the best times of year to hike this trail. Both seasons will offer cold peaks and warmer temperatures in the lower elevations. Fall colors do come to the trees that are lined along Icehouse Canyon Creek. There is a chance for ice and snow in the higher elevations as fall comes to an end, throughout the winter, and into spring. As spring comes around, there’s a wonderful show of wildflowers that start in the slower elevations.

In my opinion, summer is probably the worst time of year to hike this trail. Temperatures can be hot and just downright dangerous. That being said, in the beginning and end of summer there can be some cooler days to be found. Some species of plants bloom late into the summer at the peak.

The trail leading up to Onatario Peak is in very good condition and well market. There are two distinct sections to this trail. The first of these sections is what I think is the most difficult portion of the trail. The trail begins just outside of Baldy Village in Icehouse Canyon. At the trailhead there is a Wilderness Permit box with permits. These are required in order to hike the trail. Fill them out, keep a copy for yourself and put the other copy in the permit box.

The trail begins leading up through Icehouse Canyon and parallels the adjacent creek. Almost immediately the trail begins winding up a series of switchbacks that lead up through the area. As the trail leads up the creek it passes by a series of old use cabins. Enjoy the views and the sound of the creek while you can.  As the elevation gains the creek fades and will soon be forgotten and replaced by the fact that you’re still going up switchbacks.

The switchbacks lead up out of the canyon to a Icehouse Saddle Junction. The junction services other peaks that are in the range. Many people use this area as a pit stop before heading to their destined peaks. Some even use it to set up camp. However,the junction is usually the windiest part of the trail drawing in coastal air through Icehouse Canyon that splits between two different peaks. The Ontario Peak trail junction is directly to the right of Kelly Camp.

After leaving the Icehouse Saddle, the switchbacks are few and the trail becomes quite pleasant. The trail winds along the ridge above Icehouse Canyon and leads to an old wilderness hotel known as Kelly Camp. All that’s left are the aged and weathered stone foundations. This area is well sheltered and is a great spot for camping if an overnight trip is on the agenda.

After Kelly Camp the mixed conifer forest gives way into an old burn area littered with dead trees. From here on out the trail follows a ridge that divides both the San Benardino National Forest and the Angeles National Forest. One the south side of the ridge will be the cities of Riverside, San Benardno, and Los Angeles County. In the far distance San Gorgonio and San Jacinto Peak Can be seen. To the other side of the ridge will be Mount Baldy, Mount Baden-Powell, and the rest of the San Gabriel Mountain Range that sprawls to the coast.

Eventually the ridge terminates at the famous Ontario Peak tree – an old dead pine which now serves the purpose of a photo op. There are also a couple of wooden signs that other hikers have put up there for people to take their summit picture with. After enjoying the panoramic views of Southern California, you can head back down the ridge. Some people also include Bighorn Peak with this hike which will add an additional two miles.

As a reminder, rattlesnakes can commonly be seen along portions of this trail. Poison oak is unlikely but may be possible if one would wander along the creek where there’s persistent water and shade. 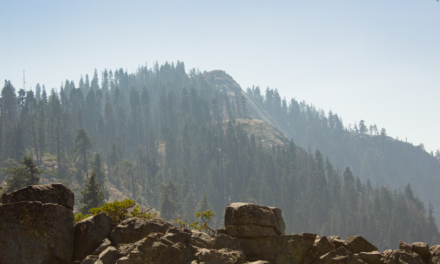 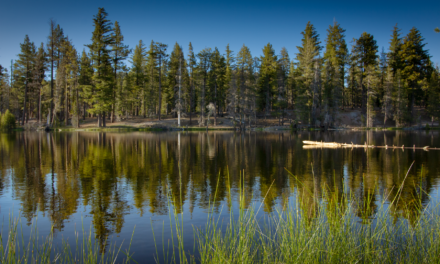 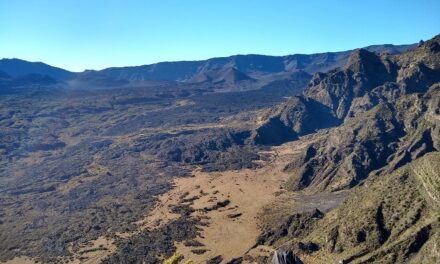 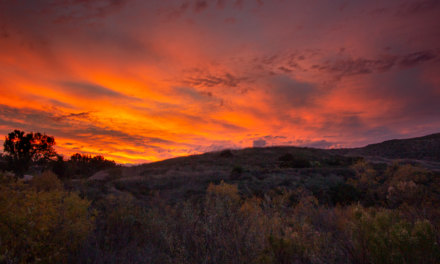